The Upper East Branch Pecatonica River watershed is within the Driftless Area of southwestern Wisconsin and northwestern Illinois. The Driftless Area is a unique geological region that shows no evidence of being covered by continental ice sheets even though they reached much farther south. Thus, the region has had more time (millions of years) than surrounding glaciated regions to erode its landscape. Along the drainage divides that separate the steep-sloped, deeply-incised valleys are gently-sloped uplands. Surficial bedrock geology is dominated by stream-dissected Ordovician (Sinnipee group) and sandstone (St. Peter formation) drains the south-facing dip slope of the Platteville-Galena cuesta (Military Ridge). The watershed also encompasses West Blue Mound, which is a regionally uncommon remnant of Maquoketa shale overlain by erosionally-resistant Silurian dolomite. Regional streams throughout the Holocene migrated laterally upon a layer of gravel that was deposited during the harsh peri-glacial conditions of the late Wisconsin. A thin layer of loess, consisting mostly of silt, covers the uplands and the depth to bedrock is less than 5 feet in most places.

The Driftless Area is also unique because it lies at the interface between two ecotones: deciduous forest to the NE and prairie grassland to the SW. Before European settlement, watersheds were dominated by tall-grass prairies and oak savannas with high infiltration capacities in the uplands and riparian wetlands (mostly wet prairie/sedge meadow with some bottomland forest) in the valleys. Cold, groundwater-dominated streams supported a diverse aquatic ecosystem which included brook trout. 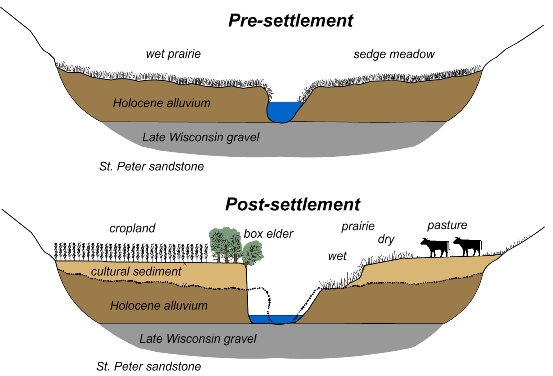 Starting around the 1830s, European settlers who were attracted to the region because of its lead and zinc resources began farming this region and converting the prairie and forest landscape into cropland and pasture. What occurred subsequently has been considered the most important hydrologic change in the region over the last 10,000 years (Knox 2006). The combination of decreased infiltration capacity and hydraulic roughness (associated with the land conversion) and the steep topography led to a dramatic increase in soil erosion, extreme flooding, and floodplain sedimentation that has been extensively documented (Cohee 1934; Knox 1972; Knox 1977; Trimble and Lund 1982; Knox 1987; Knox 2006). The federal government responded to this widespread problem by creating the Soil Conservation Service in 1933, which demonstrated and encouraged the use of soil conservation practices (for more on this history – click here). Various techniques included contour strip cropping, retirement of steep cropland and pasture and replacement with deciduous forest, longer crop rotations, and stabilization of gullies (Potter et al. 2004).

The implementation of these new practices in the mid to late-20th century led to a significant reduction in soil erosion, flooding, and floodplain sedimentation (Trimble and Lund 1982; Knox 1987; Potter 1991; Knox 2006). However, the legacy of poor agricultural practices is still present in regional watersheds; a large majority of the agriculturally-related eroded soil still remains in storage within the watersheds (Trimble and Lund 1982; Trimble 1983; Trimble 1993). This storage can be seen in the bare, erodible, and near-vertical banks along many Driftless Area streams. These banks, which can range from 0.5 – 3 meters in height, were created by historical floodplain sedimentation and subsequent incision back down to the original pre-settlement bed elevation. Floodplain surfaces in this region are now largely disconnected from their channels and floods very rarely inundate this surface. Instead, high flows are confined to the flume-like meander belts which very effectively convey flows downstream adding to flooding concerns (Knox 2006). In addition, depths to the water table have increased leaving a drier surface for vegetation. Subsequently, wet-prairie and sedge meadow species that are found in wetter environments have become quite rare in this region. 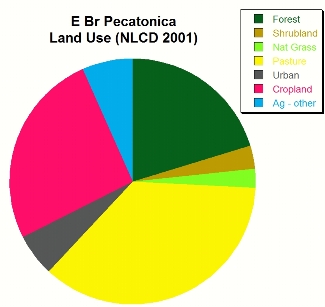 Even though upland erosion and flooding have been substantially reduced by better agricultural practices, many of the Driftless Area streams are still degraded by the reworking of agriculturally-related eroded soil in the form of bank erosion and continued sediment inputs from agricultural lands. Many of these streams contain unsuitable habitat for some native species because the substrate is covered with silt, the channel is lacking physical complexity, or the stream temperature regime has been altered due to changes in channel morphology or shading. As in most agricultural settings, elevated levels of nitrogen, phosphorus, pesticides, and bacteria are also critical water quality concerns.

Today, agriculture, which is confined to the broad, flat uplands and narrow valley bottoms, is still the predominant land use activity in the Driftless Area with corn, soybeans, pasture, and hay being the largest agricultural land cover types. Forested areas, which dominate the hillslopes, make up roughly 25 – 35% of the landscape.

Present land use in the headwaters of the East Branch Pecatonica River is slightly different than the Driftless Area as a whole due to the efforts to protect and restore native grasslands within the Military Ridge Prairie Heritage Area (MRPHA). Cropland only covers 37% of the area while grassland, woodland, savanna, wetland, and pasture combine to make up 57% of the land.